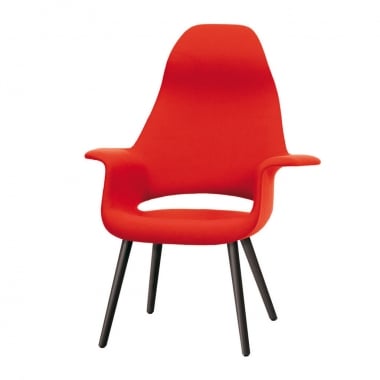 Vitra Eames Organic Chair was for the 'Organic Design in Home Furnishings' competition in 1941 by the Museum of Modern Art in New York.  The Highback version adds a built in headrest for additional comfort.

Charles Eames and Eero Saarinen created several different versions of the Organic Chair and from a technical perspective, the designs were ahead of their time. However, due to the lack of suitable manufacturing technology, they never went into production.

It was only later that organically shaped seat shells could be produced and sold in larger quantities, such as the Eames Plastic Chair. In 2006, Vitra and the Vitra Design Museum launched the first serial production of the Organic Chair, bringing this classic design piece back to life.

If you do not live in the UK please contact the manufacturer directly for information on a local retailer.

Any product can be returned within 14 days of delivery for a full refund.

The only exceptions are items that are custom made 'one off' products, i.e. you have supplied your own fabric, or, a product that has been made as a 'one-off' piece, for example a custom made table in a unique shape.

Products
How do I know if this product is right for me?

Wellworking offer a high level of expertise and experience, contact us via our live chat, email or call us on 020 3110 0610 - we love talking about furniture!

Are your products environmentally friendly?

We aim to offer environmentally friendly products throughout our supply chain. Many of the manufacturers we work with are industry leaders in green technology and offer outstanding green credentials. Most importantly, they make products that are designed to last.

Do contact us if you have any questions or feedback regarding a specific product and we would be delighted to help.

Delivery
How long do items take for delivery?

Delivery times are specified above and on your checkout page.

Many items are made to order so that you can select your own unique specification.

If you wish to get your item sooner, then please choose from the In Stock section which is a selection of products that have been bulk ordered by Wellworking in the most popular specifications and are available for dispatch from our warehouse in 2-3 days.

Yes, all UK mainland deliveries are free of charge and this includes assembly and installation for larger items (like chairs and desks). Smaller items are delivered by DHL while items of furniture are delivered by the Wellworking delivery team.

Where do you deliver to?

We only offer deliveries throughout Mainland UK. We do not sell any items outside of the UK. If you do not live in the UK please contact the manufacturer directly for information on a local retailer.

Does this come assembled?

Yes, our delivery team will assemble this for you.