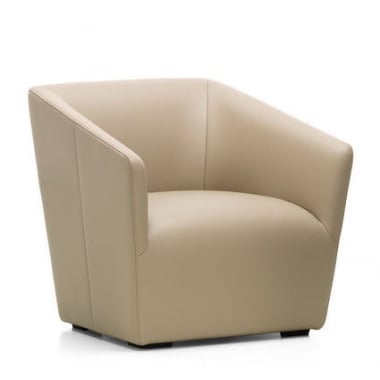 Developed for Vitra by Jasper Morrison, the Occasional Lounge Chair is a charming, compact armchair: its outward shape has the appearance of a cubic volume with clean lines, straight edges and a polygonal body that tapers downward. The design is subtle enough to utilise several chairs together – in free arrangements or geometric configurations – yet with its distinctive look, the Occasional Lounge Chair also adds a striking accent to any interior as a solo piece.

The inward shape of the lounge chair, by contrast, is characterised by softly rounded, organic contours. Despite its modest dimensions, the seat cushion and backrest provide an inviting cosiness and level of comfort that one would not expect from the Occasional Lounge Chair at first glance. The combination of a minimalist aesthetic with maximum functionality typifies Jasper Morrison's philosophy of 'super normal' design.

As a modern, unobtrusive armchair, the Occasional Lounge Chair is suited for hotels, lobbies and waiting areas as well as home environments. In private interiors, it cuts a fine figure either on its own or especially when paired with the Soft Modular Sofa, likewise by Jasper Morrison.

If you do not live in the UK please contact the manufacturer directly for information on a local retailer.

Any product can be returned within 14 days of delivery for a full refund for any reason. Original packaging is not required.

Wellworking offer free collection for all items being returned from UK Mainland addresses. Your refund will be credited to your original payment method once the item has been returned.

Please email us at info@wellworking.co.uk to arrange a return.

Products
How do I know if this product is right for me?

Wellworking offer a high level of expertise and experience, contact us via our live chat, email or call us on 020 3110 0610 - we love talking about furniture!

Are your products environmentally friendly?

We aim to offer environmentally friendly products throughout our supply chain. Many of the manufacturers we work with are industry leaders in green technology and offer outstanding green credentials. Most importantly, they make products that are designed to last.

Do contact us if you have any questions or feedback regarding a specific product and we would be delighted to help.

Delivery
How long do items take for delivery?

Delivery times are specified above and on your checkout page.

Many items are made to order so that you can select your own unique specification.

If you wish to get your item sooner, then please choose from the In Stock section which is a selection of products that have been bulk ordered by Wellworking in the most popular specifications and are available for dispatch from our warehouse in 2-3 days.

Yes, all UK mainland deliveries are free of charge and this includes assembly and installation for larger items (like chairs and desks). Smaller items are delivered by DHL while items of furniture are delivered by the Wellworking delivery team.

Where do you deliver to?

We only offer deliveries throughout Mainland UK. We do not sell any items outside of the UK. If you do not live in the UK please contact the manufacturer directly for information on a local retailer.

Does this come assembled?

Yes, our delivery team will assemble this for you.